Nothing is safe from the prying eyes of social media, even actor Sajal Aly’s recent Instagram surname change, which sparked an explosion of panic and fan tears on Twitter.

Sajal Aly, the star of Sinf-e-Ahan, has changed her Instagram name from ‘Sajal Ahad Mir’ to ‘Sajal Ali.’ After her marriage to actor Ahad Raza Mir in 2020, she adopted the surname ‘Ahad Mir,’ which she proudly posted on Instagram immediately after.

We have no idea why Ali changed her surname on Instagram because she hasn’t provided any explanation. We have no right to guess on something as intimate as her marriage in the absence of a reason from the actor. Perhaps it’s as basic as a desire to claim her name and identity as a person, independent from the duties she’s taken on since her marriage.

When Ahad was absent from the promotional events and premiere of the film ‘Khel Khel Mein,’ starring Sajal and Bilal Abbas, the marriage fueled divorce rumors.

The rumors were reinforced even further when the Mir family, including Ahad, were absent from Sajal’s younger sister Saboor Aly‘s wedding earlier this year.

Twitterati Reacts On Their Divorce:

Sajal Ali’s name change triggered a flurry of reactions from hardcore fans on Twitter, many of whom speculated about whether things were well between her and Raza Mir.

“Okay so Sajal changed her username from Sajal Ahad Mir to Sajal Ali,” one user tweeted. “There were many rumors but still I don’t know how to feel about this. This is so heartbreaking. I don’t have enough words.”

Ok so Sajal changed her username from Sajal Ahad Mir to Sajal Ali. There were many rumors but still idk how to feel about this. This is so heartbreaking. I don’t have enough words. OH GOD.

“You know what hurts the most? This! I always had them in my ‘recent’ because I stalked them all the time. [I would be happier] seeing Sajal Ahad Mir and Ahad Raza Mir,” tweeted another user.

Yk what hurts the most? THIS 😭😭😭 I always had them in my recents cause like I went to stalk them all the time. And like I would get happy seeing Sajal Ahad Mir and Ahad Raza Mir 😭😭😭😭😭 pic.twitter.com/Sss1vk3ii7

Some fans requested others to respect Ali and Raza Mir regardless of whatever rumors are floating around on social media.

Request to all sahad sajal ahad fans don’t hate on them professionally. They came into our lives as actors first so let’s always respect that.❤️

Amid the ongoing speculations surrounding actors Ahad Raza Mir and Sajal Aly’s alleged divorce, Azfar Rehman has taken to his Instagram Stories to pen down a thought-provoking message.

“Divorce is a very difficult decision to take, especially when the world knows about you and your spouse,” the actor asserted. He went on to request everyone to act responsibly instead of sending insensitive messages to the actors in question, or connecting dots that may have nothing to do with the situation – in the case that there is a situation. 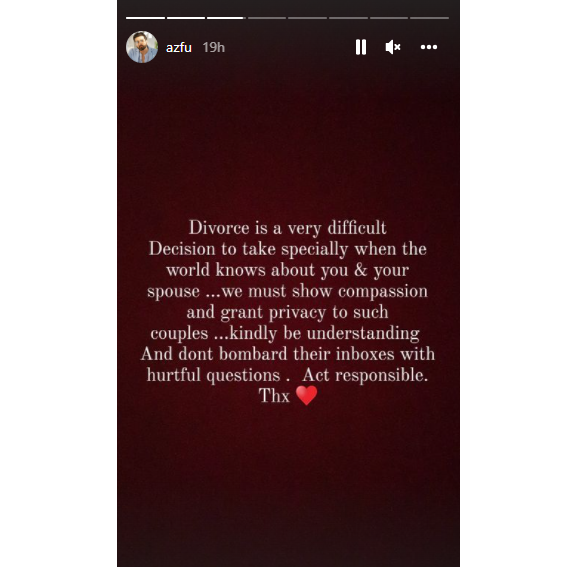 “We must show compassion and grant privacy to such couples,” the model-cum-host went on to plead. “Kindly be understanding and don’t bombard their inboxes with hurtful questions. Act responsibly, thanks,” concluded Azfar.

And according to her perhaps after signing the complete divorce papers, Sajal has removed Ahad Raza Mir’s name from her’s in her Instagram bio a few days ago. However, both the stars are keeping tight-lipped about their personal lives.

There hasn’t been a single comment shared either by Sajal or by Ahad Raza Mir.

Sajal Aly and Ahad Raza Mir tied the knot on March 15th, 2020. Sources claim that after a year of speculated separation, one of the most favorite couples of the Pakistan show biz industry has parted ways.

The news has left the SaHad fans heartbroken. And ever since Sajal removed Ahad from her name at Insta bio, hashtags #SajalAly #AhadRazaMir and #SaHad are trending on top of the Pakistani Twitter timeline. The rest of the fan following doesn’t want to see their favorite couple get apart, and for that, they are wishing them good luck.